Volterra and the Demise of the Etruscans – Mini Series on Saturdays 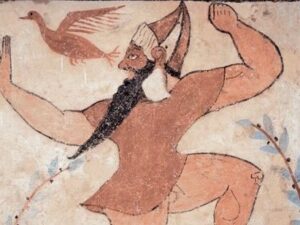 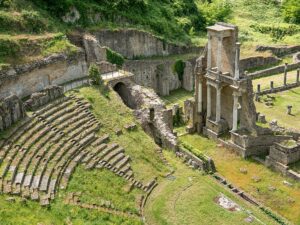 As a result of the wealth they accrued from their trade in metals, wine and pottery, the Etruscans were able to dominate much of Italy from the 10th to the 6th centuries BC. Its: Their long, slow decline coincided with the burgeoning power of Rome, whose growth was greatly enhanced by the fact that it was situated in-between two great cultures: Etruscans and Greeks, who traded with one another.

By the first part of the 3rd century BC, each of the 12 cities of the Etruscan league had been conquered by Rome and by the 1st century BC their language, which made the Etruscans so distinctive, had disappeared. Such was their demise that we are unable to fully grasp what their 13000 surviving inscriptions tell us, just as their vast literature hasn’t survived and the name we call them is one we have inherited from their conquerors.

This same evolution from Etruscan to Roman culture is visible in the inimitably beautiful Tuscan town of Volterra, which was first settled in the Villanovan period and became one of the 12 cities of the Etruscan league. Just as with Rome, its Etruscan origins are central to the fabric of the town, from its Etruscan acropolis to its Etruscan gateway which preserves the busts of the Capitoline triad of Tinia (Jupiter) Uni (Juno) and Menvra (Minerva).

Lasting 60 minutes plus a live Q&A session, our spotlight lecture offer a focussed study of aspects found in art, history and literature while combining our exclusive filming, advanced visual aids and the enthusiastic expertise of our lecturers.

Our virtual tours cover a wide array of historical and art-history topics, ranging from antiquity to the early modern period. We explore a variety of historical topics, from the every day life in ancient and early modern cities to representations of power. Exploring both world famous sites and those unknown to most, these lectures will bring history and the history of art to life through tailor made HD filming, as well as perceptive lecturing and lively discussions.

The virtual tours last 60 minutes followed by another 30 minutes of Q&A with our lecturers who will be delighted to answer any of your questions. Small groups with maximum 15 participants to ensure maximum interaction.