The Ubiquity and Power of the Phallus

In 1819 Francis I, King of the Two Sicilies, visited Pompeii with his wife and son and remained so scandalised by the number of phalluses and frescoes depicting sexual acts that he decreed they be removed to a room accessible only to scholars. This gave rise to the collection of seemingly obscene artefacts in the ‘Secret Cabinet’ which swiftly became so popular that the entrance to it was blocked off in 1849 and it remained closed until 2000 (in the 1960s those seen to be mature and respectable were allowed to visit the room for a fee). 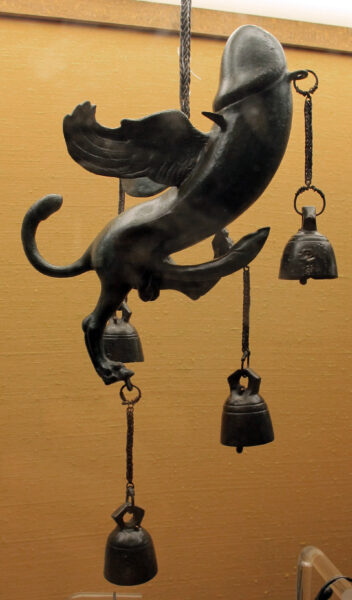 Among the most striking and common objects in the Secret Cabinet are artefacts which depict phalluses, reflecting their ubiquity in the Roman world. They were found on street and shop signs, on candelabra and oil lamps, everywhere in the private and public spheres. In order to get a sense of why this is we can turn to the word fascinare which means to bewitch or cast spells; it is where we get the word fascination from and, in turn, it derives from the word fascinum or phallus.

The phallus, through its ability to beget, was deemed so powerful that it could protect vulnerable places and people. Children in the Roman world wore phallus rings and wore necklaces, bullae, which enclosed phallic amulets. Likewise, homes were protected by assortments of phallic tintinnabula, as well as statues of Priapus, the god of the membrum virile, which stood guard in their gardens. The proliferation of graffiti in Pompeii and Herculaneum depicting fascina and obscenities can also, to an extent, be explained by the need for ordinary people facing difficult lives to try to ward off bad luck. 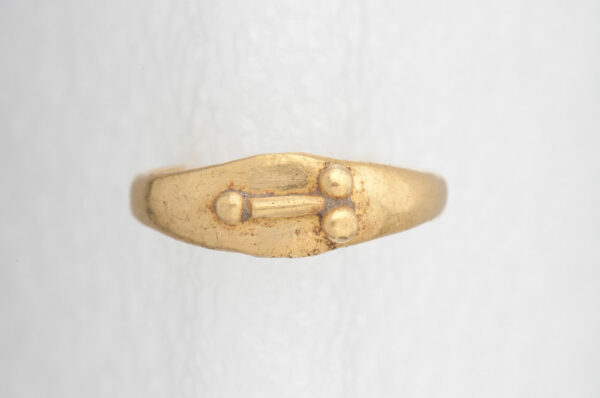 Phalluses were also used to protect people whose success would induce the envy of others and, through this, ill will. This politics of envy can be seen in Catullus Carmen V when he exhorts Lesbia to:

Catullus wants to share thousands of kisses with his beloved Lesbia but is conscious that, if the exact number were made to known to others, they would wish them harm out of envy. The fascinum protected people against this envy because its singularity attracted attention away from envious glances. For this reason, the triumphant general driving through the streets of Rome as the embodiment of success added fascina to his chariot to ward off the evil intent of those in the crowd who typically shouted obscenities at him.

Not surprisingly the phallus was associated with sexual acts. In some Pompeiian graffiti, the fascinum becomes the agent or symbol of the sex a man would have. One graffito says ‘I am drawing the phallus that will have Clymenene’ (describe phallum habebit Clymenene). This connection with sex can have more pernicious connotations as the fascinum, with its power, can be a weapon that its wielder can use to attack others. Priapus is able to protect houses because of his power to assault those who might threaten them.

A more humorous example of the phallus being used as an instrument of attack can be seen in a well-known fresco in the Secret Cabinet which depicts Victoria being driven in a chariot by a donkey who is assaulting a lion. This has sometimes been depicted as an imaginative representation of Octiavius’ victory over Antony at the Battle of Actium, as the former reportedly saw a donkey called Nikon (victory) being driven by a man called Euthychus (prosper) just before that battle. Antony, in turn, was associated with Hercules, who was associated with lions. In this formulation, victory is represented as assault and the phallus is the power that enabled this domination to occur. 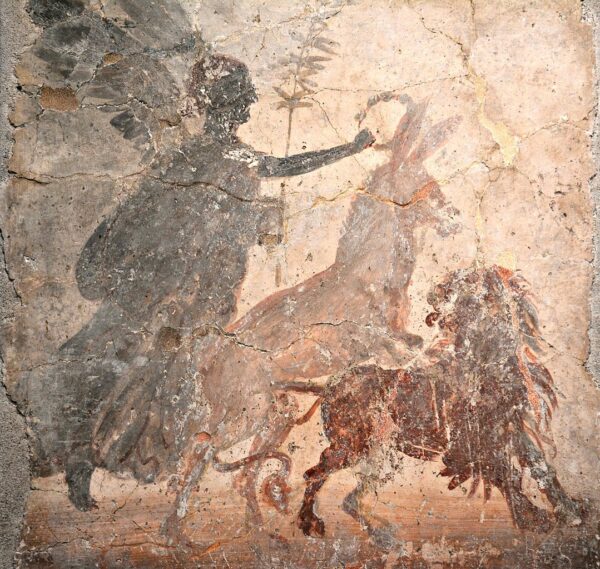 With its power to ward off evil, it is obvious why the fascinum was seen to bring good luck. A well known phallus inscribed with the words Hic Habitat Felicitas (Properity/Happiness lives here) adorned the walls of a bakery for the same reasons that another baker put a fascinum on his oven – in the hopes that the phallus would bring them good fortune and wealth.

In the same vein, the entrances to the House of the Vetii and the newly discovered House of Leda, were decorated with showy frescoes of Priapus weighing his membrum virile. The owners of these houses both wanted to ensure that good fortune would reign in their houses and show off how much wealth they had accrued through their good luck, hence Priapus weighing his phallus to see how much money had been earned. 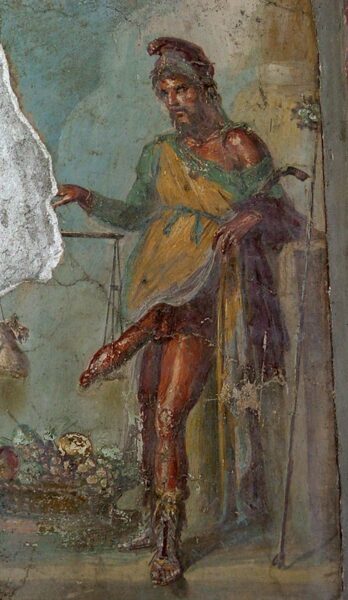 The sensibilities of Francis I, who deemed these fascina obscene, and the giggling tourists visiting the Secret Cabinet, all miss the point. The phallus was ubiquitous in the Roman world not because it was rude but because it helped people navigate their lives, giving them hope that they can be protected from bad things, that their houses and children can be safe and just maybe that they can earn a lot of money.