The Teatro Olimpico in Vicenza

The remarkable Teatro Olimpico in Vicenza, started by Palladio and finished by his able Vicentine pupil Vincenzo Scamozzi in 1585, is not only one of the great architect’s masterpieces but also shows his deep understanding of Roman architecture. Commissioned and paid for by the members of the Olympic Academy, a group of Vicentine academics which included Palladio himself, the Teatro Olimpico is the oldest surviving Renaissance theatre. Built in a disused fortress, the Teatro was constructed at a time which saw an increased interest in Classical antiquity, including Classical theatre. 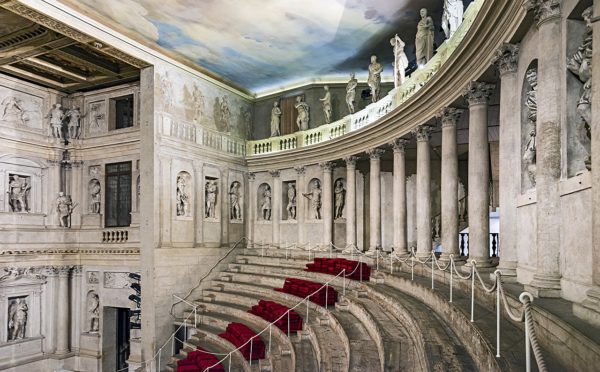 Interior of the Teatro Olimpico and the seating

The Teatro is a fruit of Palladio’s painstaking researches into Roman architecture, which include his studies of Vitruvius, the Augustan architect whose work was illustrated by Palladio for Daniele Barbaro’s translation. It is on the basis of Vitruvius more than through extant Roman theatres that Palladio based his designs for the theatre, including the cavea and the stage building. Like his Roman counterparts, Palladio conceived of a theatre whose stage building and auditorium were united and whose architectural order was Corinthian. Unlike them, Palladio was forced by the constrained space to have an elliptical cavea than a semi-circular one.
Perhaps the most remarkable element of the Teatro is the stage building which was designed by Scamozzi on the basis of Palladio and his son Silla’s drawings. The scaena, like Roman examples, was pierced by three front doors and two lateral ones and was adorned by statues of the men who paid for the erection of the theatre (in the case of the Teatro the sculptures depict the members of the Olympic Academy who paid for the theatre).

Similarly, the scaena was conceived as a cityscape, although Scamozzi takes this reconstruction of a city to new levels by using newly developed ideas about linear perspective to make the recreated city three-dimensional. Whereas the space behind Roman scaena was blank, Scamozzi’s stage opens off into seven hallways which are made to look like different streets. While the area behind the stage front is only a few metres, Scamozzi, using false perspective, creates, with great effect, the illusion of long street views. The incredible realism of these street scenes is augmented by the lighting which Scamozzi added within individual houses in these faux streets. 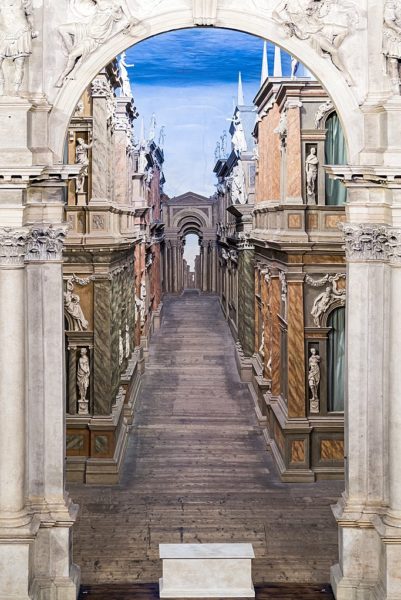 Close up of the Scaenae frons and one of the streets

With skilful use of geometry, the architect was able to ensure that everyone sitting in the auditorium had a view of at least one of the streets behind the scaenae frons. What is perhaps all the more remarkable is that Palladio and Scamozzi constructed the whole of the theatre out of wood, plaster and stucco, in an effort to reduce the costs. It is no wonder that modern productions staged in the Teatro are accompanied by ever present fire fighters stationed outside.

The stage building was fashioned for the opening night production of Sophocles’ Oedipus Rex, a production which was painstakingly authentic. As such, the street scene we are presented with on stage is an imagined version of Thebes, the city of Oedipus. The decision to debut the Teatro, heavily Classicising as it is, with a Greek tragedy is hardly surprising given the humanistic and antiquarian interests of the members of the Accademia Olimpica. Interest in Classical theatre had, after all, increased in the 16th century, with the advent of the Reformation and the concomitant decline of religious plays. While the Accademia stipulated that actors not wear masks, as they had done when Sophocles wrote the play, they remained faithful to the musical nature of Greek drama. Actors declaimed musically and the chorus sang to music composed specially for the night by Andrea Gabriele, the maestro del coro of the Basilica of San Marco in Venice.

Interior of the Teatro Olimpico – the Scaenae frons

Sadly, while the opening night was critically acclaimed, it was equally monumentally expensive, which inhibited the further production of other plays. Their loss is our gain as the originally scaenae frons produced by Scamozzi for Oedipus Rex has survived, a masterpiece of Renaissance architecture.