Rome Transformed: from Paganism to Christianity

Rome has undergone more transformations in its long history than most cities. One of the most interesting is its transformation from a pagan to a Christian city. With the long passage of time separating us from late antiquity it is all too easy to compress history and we might be forgiven, as such, for thinking that the Edict of Milan of 313, which legalised Christianity, issued in the Christian era which quickly wiped away paganism.

The metamorphosis, however, was far from straightforward as can be seen by the third and fourth century hypogea found outside of Rome. One of the most intriguing is the Hypogeum of the Aurelii, found in 1919 during the construction of a garage. The hypogeum, an underground tomb, clearly predates the Aurelian walls erected in AD 273 as can be seen by the fact that it is located within the city walls. Indeed it dates to the Severan period and an inscription states that it was built by Aurelius Felicissimus to house the remains of his siblings and fellow freedmen, Aurelius Onesimus, Papirius and Aurelia Prima. What makes this a fascinating tomb is the combination of Pagan and Christian frescoes, which include the depiction of Odysseus and Circe, as well as the representation of Adam and Eve.

This mixture of pagan and Christian has led some to argue that the Aurelii were gnostics or philosophers, in the belief that Christians wouldn’t want to include scenes from Greek mythology on their tombs. I think, rather, that these freedmen, eager to show off their wealth, included mythological scenes because it was a sign of erudition. They wouldn’t have seen the combination of Biblical and mythological scenes as paradoxical all. 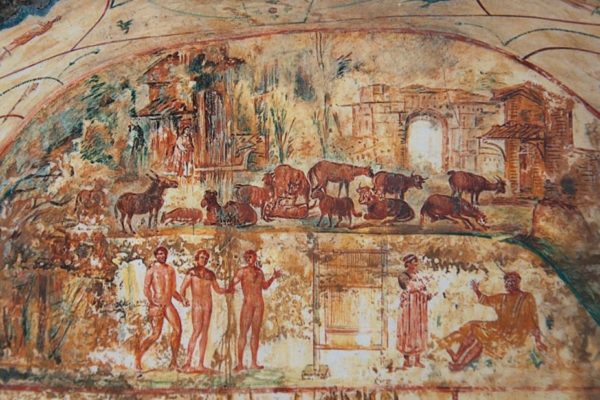 The same combination of Pagan and Christian scenes can be seen in the Via Livenza Hypogeum. Dating to the second half of the 4th century, the hypogeum has a fresco of Diana, as well as one that has been interpreted as representing Saint Peter striking a rock from which water issues, slaking the thirst of the centurion.

Roman fresco depicting the goddess Diana hunting, 4th century AD in the Hypogeum of Via Livenza

Roman Hypogea not only show that Christians were happy to have tombs decorated with mythological scenes but that it took some time for pagan rituals to die out. The late fourth century Hypogeum of Vibia is notable for its depictions of the deceased being taken to the underworld in the guise of Proserpina being abducted by Pluto. In another scene which names the characters, Vibia is seen being led by Mercury, the psychopomp.

It is hardly surprising the Vibia not only draws from mythology but depicts death and afterlife in pagan terms, given that her husband Vincentius was the priest of the Phrygian god Sabazios. So while the Aurelii, whose tomb belongs to the early third century, were Christian even before the religion was made legal, Vibia more than a century later was avowedly pagan. It took time for Rome to be transformed from the Caput Mundi to the Holy See. 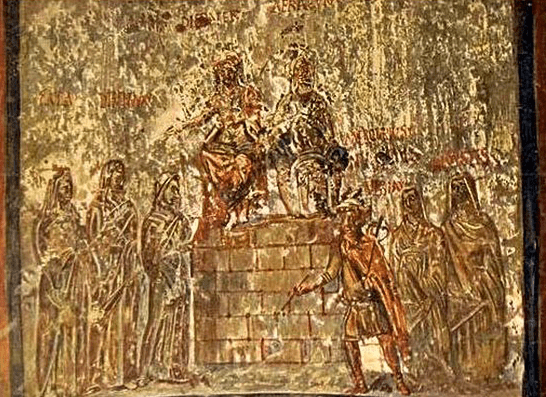