The Famous Inhabitants of the House of Julius Polybius

Pompeii and Herculaneum offer such exceptionally well-preserved ruins that we have a burning desire to know more about the individuals who met their ends here in such a visible and dramatic fashion.  We know so much that we want to know more. This has led archaeologists to name houses after supposed owners, to identify and name individuals who have been found, as well as piecing together the gruesome last moments of those who died in the eruption of AD 79.

Walking down the Via dell’Abbondanza towards the Sarno gate, for instance, we find the Praedia of Julia Felix and the House of Octavius Quartio, establishments named after their presumed owners. It’s part of an instinct to ‘people’ the site of Pompeii and bring it back to life, even at the expense of accuracy.

Perhaps the most notable example of this practice of piecing together the lives of a family can be found in the House of Julius Polybius, located again on the Via dell’Abbondanza, the decumanus maximus of Pompeii. The house is so named because electioneering slogans naming C. Julius Polybius were found on the façade of the house and nearby. While electioneering adverts wouldn’t themselves be very good evidence of the ownership of the house, a graffito next to the lararium near the kitchen giving greetings to one C. Julius Philippus seems to cement the suggestion that the house was owned by a Julius, though the connection between Philippus and Polybius can’t be known. 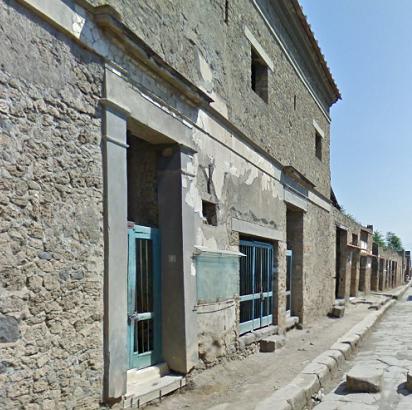 Façade of the House of Julius Polybius

Scholars excavating the house went further in their identification of this house, linking this Julius Polybius, who is known from about fifty electioneering programmata, to the famous Julius Polybius who was the Emperor Claudius’ powerful freedman, though the links are somewhat tenuous. It gives us a frisson of excitement to think that the son of the powerful imperial freedman, Polybius, would be known to us from his house. It would mean we can be in the same space as someone we only know about from literary sources.

The house, which dates to the second century BC, was first excavated in 1913 and then between 1966 and 1978. From the work carried out, it appears that the house was badly damaged in the AD 62 earthquake which ravaged the area. This is suggested by amphorae and piles of lime found in the tablinum, as well as the stacking of furniture and an assortment of bronze goods, including a statue of Apollo, in the triclinium. It is a grand house which is divided into two sections, including two separate entrances, emphasising the wealth of its occupants. 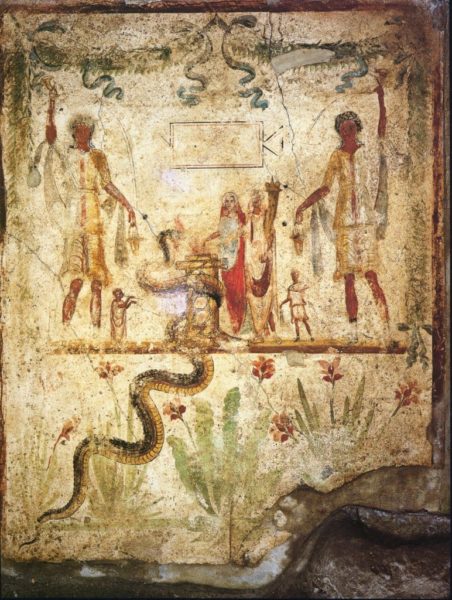 The most significant finds are the 13 bodies found in two rooms excavated in the 1970s which have been studied at length, for the clues they give us about the health and lifestyles of ancient Pompeiians. This treatment of the skeletons is a departure from the practice of making plaster casts of bodies initiated by Giuseppe Fiorelli in the 1860s. By filling the voids left behind by decayed bodies with plaster, the Fiorelli method recreates the bodies of the victims, bringing them back to life so to speak.

Archaeologists who have researched the skeletons, using techniques which are developing all the time, have found another way of bringing Pompeiians back to life, giving greater understanding of what they ate, what diseases they suffered from and how healthy they were. What is interesting is that, even in this scientific age, scholars haven’t been able to resist the desire to identify the victims, the relationships between them and the story of their last hours.

In the case of the House of Julius Polybius, there seems to be a very compelling story to tell. One of the victims, a teen aged between 16-18, was very heavily pregnant, leading to the reasonable supposition that she, and those around her, had barricaded herself in the house because she wasn’t able to move far or fast.

Near her, excavators found the body of a woman wearing lots of gold jewellery and carrying a bag filled with coins, as well as a man slumped over, clutching his chest with his right hand. Scholars have variously identified the young slumped man as the pregnant women’s husband and the woman as her mother.  In addition, two sixty-year-old men were found, whom excavators were quick to identify as Julius Polybius and Julius Philippus.

While it is hard to know how much credence to give to these theories, more recently, the mitochondrial DNA of some of the victims was extracted, suggesting that six of them, at least, were related.  Although the most interesting work done on these skeletons remains the study of the diseases they had, which suggests their diets were good, I don’t think anyone can really stop being intrigued about the story of these people found huddled together. Whether they were Julii or not, they were certainly faced with a catastrophe which we can very palpably feel. Knowing more about them allows us to further ‘people’ Pompeii. 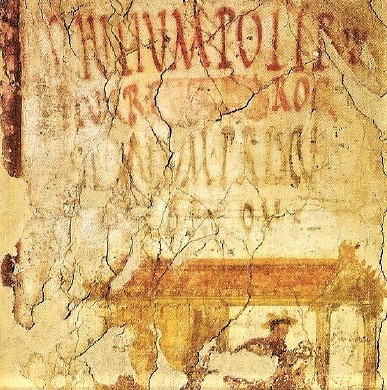